At DUI checkpoints, also called roadblocks, police will stop vehicles to determine whether the driver operating vehicle under the influence.  Most often, these checkpoints are set up in high DUI traffic areas.  This is at times where drivers are likely driving under influence, such as holidays, late night, around bars, etc. 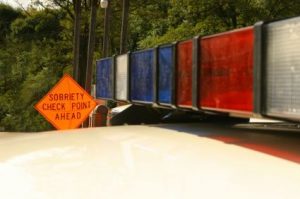 According to 4th Amendment of US Constitution, in order to stop your vehicle and pull you over.  Police must have at least reasonable suspicion that you committed or were about to commit a crime.  As such, you would think that DUI checkpoints/roadblocks are set up to randomly test drivers' sobriety would be unconstitutional.  Unfortunately that is not true.  In 1990, the U.S. Supreme Court upheld properly conducted DUI checkpoints as constitutionally permissible.  The states' interests, the Court reasoned, in reducing drunk driving outweighed any constitutional concerns that roadblocks may violate.

Although the U.S. Supreme Court gave sobriety checkpoints the OK, 10 state constitutions still found them to be impermissible.  That means they are not allowed and are never used in a small minority of states today which include:   Idaho, Iowa, Michigan, Minnesota, Oregon, Rhode Island, Texas, Washington, Wisconsin, and Wyoming.  In vast majority of states, their permitted and performed, though how conducted varies drastically from state to state.

If you have been arrested for DUI as a result of a roadblock or sobriety checkpoint, be sure to contact an experienced attorney in your state, city, or county for more information on how the circumstances of your stop could affect your case.

What Are "Properly Conducted" Checkpoints

The U.S. Supreme Court upheld DUI roadblocks to be constitutional, but only those that are properly conducted - with set guidelines and procedures.  Guidelines supposedly help to justify the intrusion on your right to privacy.  They prevent the police from just setting up roadblocks wherever, whenever, stopping whomever they wish.  The Court did not, however say exactly what these guidelines were.  Instead, they left it up to each state to create their own procedures.  Resulting in drastically differing DUI roadblock laws around the country.

When the U.S. Supreme Court didn't expressly give their own guidelines, NHTSA (National Highway Traffic Safety Administrator) took it upon themselves to create standards recommending procedures that the states could adopt or follow at their discretion.

The way DUI checkpoints are actually conducted in the field vary drastically from state to state.  Listed below are NHTSA's guidelines for sobriety checkpoints:

What to Expect At A Checkpoint

Some states require that a police supervisor determine who to stop.  Some require the guidelines that the police follow written.  Others require notice given to the public, either by posting signs or publishing newspaper warnings.  Whether it's every car, every other car, or every 13th vehicle stopped.  Cars stopped uniformly at random to help deter police misconduct.

Most often, if you are driving through a DUI checkpoint, and you are selected. Your signaled or waved to pull your car over for a random stop.  The officer will ask you for your driver's license and car registration.  During this time your asked questions such as where your going or where your coming from.  The officer will closely observe you and look for signs of impairment.

If they suspect your impaired, it may be because you have physical signs.  Such as flushed face, messy clothing, odor of alcohol on breath, bloodshot watery eyes, slurred speech, etc.  They will also look at the way you are handing them documents they requested from you.  Often impaired people have difficulty finding and producing driver's license and registration without fumbling.

If signs of impairment observed, then officer will suspect your impaired and order you to exit your vehicle.  You then will likely be given roadside exercises, or a portable breath test.  If you fail the tests, or often even if you refuse to submit to them.  Your placed under arrest and taken to the police station.  Your then asked to submit to a chemical test of your blood, breath, and/or urine.  Remember each state's laws are different, so the described scenario above will vary from state to state.

Know Your Rights When At DUI Checkpoints

You do have to pull over, and when asked for your identification you must produce it.  If asked if you were drinking however, you do not have to answer.  You do not have to perform the roadside tests either.  Although your not told, you have a choice to whether or not you will submit to roadsides or chemical tests.  You always have the option of refusing.  Note, however, that most states have penalties for refusals, where your driver's license suspended.

It is important to understand that never forced to incriminate yourself.  Police cannot compel you to say or do anything that would help give them probable cause for your arrest.  You have right to remain silent, and you should, because whatever you say will likely used against you.  A lot of people think that honesty is the best policy. If you admit to the police you had a couple drinks but not drunk, that you will be OK.  You won't.  The breath tests can produce invalid results.  You should never trust a machine to be as reasonable as you think an officer will be.

Roadblock cases are unique to other DUI cases.  The prosecution's burden of proving your stop was valid one involves establishing the checkpoint complied with local laws and guidelines.  Although there may not be as harmful of evidence against you i.e, there is no evidence of any particular driving pattern indicative of impairment, you still should consult with an experienced attorney in your state, city, or county for help in defending your roadblock DUI.

Choice of DUI Test Relative to Suspect and Officer  -  Is the choice of DUI test mine or the officer's? There are 3 chemical tests (blood, breath, and urine) that measure a person's blood alcohol content.