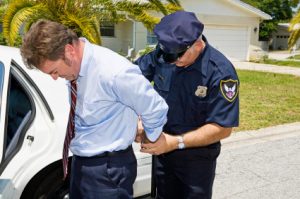 Just like the Walk and Turn, the One Leg Stand is a test commonly used by police to measure a DUI suspects level of impairment.  Just like all other field sobriety exercises, it's not referred to as test, especially in front of jury.  Why?  Because you do not want it to sound like something you can actually pass or fail.

If the One Leg Stand sounds tough to you just by it's name.  That's because it is probably the most difficult sobriety exercise your asked to do.  Your instructed to stand with one foot, which ever foot you choose, six inches off the ground.  While counting aloud by thousands (one thousand-one, one thousand-two, etc.), until told to put your foot down.  Your timed for 30 seconds.

During the One Leg Stand, the officer will be looking for four different clues, or indicators of impairment:

Listed below are reasons why you should never agree to perform the One Leg Stand if suspected of DUI:

Failure of the One Leg Stand

Practicing the One Leg Stand

Summary of One Leg Stand

Remember playing games as a little kid?  Hopscotch, for example.  You play that on one foot.  But your allowed to hop.  Your supposed to hop.  You use you arms for balance by putting them out parallel to ground so you won't fall on your face.  The point here is that the One Leg Stand isn't hopscotch.  It's not a game.  If you fail you go to jail - without a get out free card!  So if you are ever asked to play - say no!

These are just a few of the many reasons why you should never submit to the One Leg Stand.  Unfortunately many of you reading this are already arrested, and may have already performed this exercise.  So I guess it's a little late and of little help to tell you. The best thing you could do is refuse to perform the One Leg Stand.  Instead, if you have already been arrested and submitted to the exercise, the best thing to do is contact an experienced attorney in your state, city, or county for help in defending your case.

Per Se DUI Laws and Legal Limits  -  How "Per Se" DUI Laws Affect Your Case: DUI Legal Limits In all 50 states and DC, it is a crime to operate a motor vehicle with a BAC higher than .08.

Drunk Driving Acronyms for Complete Understanding  -  If you are confused by all the drunk driving acronyms out there that are used to refer to the crime drinking and driving, you are not alone. DUI, DWI, OUI, OWI

Field Sobriety Testing in DUI Cases: A General Overview  -  Field Sobriety Tests or FST's (horizontal gaze nystagmus (HGN), the walk and turn, and the one-leg stand tests) are a set of test used by law enforcement.