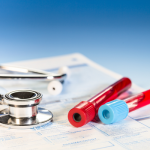 The crime lab analysis of DUI blood samples is critical to your DUI case. From the accreditation of the lab, preparation of the samples and the instruments used in testing, there are numerous potential pitfalls.  Below you will find a brief overview of the different ways blood samples analyzed in DUI cases.

In Headspace Gas Chromatography, a nonvolatile solution added to the blood sample.  An internal standard typically also added to the blood for quantitation purposes.  A technician places the vial containing the blood sample into a closed container.  The sample then heated.  Upon heating, a vapor forms, filling the space (called the "headspace") between the vial and the top of the container.  Once the vapor reaches equilibrium,  a sample of the vapor is taken and injected into a gas chromatograph instrument.  This instrument tests the concentration of alcohol that was present in the head space vapor.

Direct Inject Chromatography also commonly used.  In this testing procedure, instead of measuring the alcohol levels in the headspace vapor.  The blood itself injected into the chromatography instrument.   This method considered by some to be more reliable then the headspace method.

The Enzymatic Method not commonly encountered by DUI defense attorneys.  It's more technical and expensive.  Moreover, only highly sophisticated labs can perform this method.  Labs equipped with properly trained technicians and special machines.

Not specifically developed for testing ethyl alcohol, this method presents problems of mistaking other chemicals as alcohol, leading to a false reading.

House Arrest and Home Detention in DUI Cases  -  House arrest is a great alternative for both the government and the DUI offender.